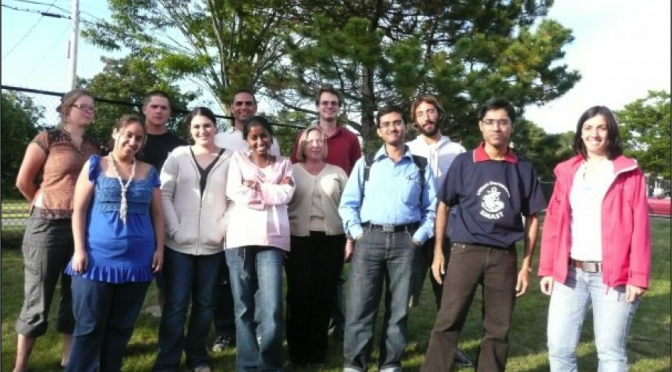 The SMAST Student Excellence Award (SEA), proposed by the SMAST Graduate Student Association, has been recently established. The objective of this award is to recognize students’ accomplishments by rewarding individuals who excel in a combination of three core areas: academic accomplishments, scholarly activity, and public service. Nominations are due to the Dean’s office by April 1.

Students are the mainstay of the graduate program at the School for Marine Science and Technology (SMAST), University of Massachusetts Dartmouth. The accomplishments of students during their tenure at SMAST help to promote their institution and build its reputation. This role is continued after students graduate and move on to represent the program as alumni while pursuing careers in marine science and other related fields. In order to recognize the accomplishments of SMAST graduate students, we have established an SMAST Student Excellence Award (SEA), which will be annually presented to one student during each spring semester. The objective of this award is to recognize students’ accomplishments by rewarding individuals who excel in a combination of three core areas: academic accomplishments, scholarly activity, and public service.

The process for annually selecting the student who will receive the SMAST Student Excellence Award will proceed as follows:

1) Students must be nominated for the award by an SMAST faculty member. This faculty member can be the student’s advisor. The nomination should include a) a brief statement of why they feel the student is a strong candidate for the award addressing the three core areas and b) an updated CV emphasizing the student’s accomplishments during their tenure as a SMAST graduate student. Nominations must be submitted annually to the SMAST Dean by April 1.

2) The nominations will be reviewed by a Selection Committee. This Committee will consist of the SMAST Dean and two SMAST faculty members. Individuals on this committee will serve for a two-year term, after which new members will be solicited through consultation among the department chairs and the SMAST Dean. A rubric for scoring applications will be developed during the first year by the Selection Committee and the SMAST Graduate Student Association. This rubric will focus on evaluating the excellence and contributions of the nominees in the three core areas. The committee will meet each April to review applications and select the student who will receive the award.

3) The award will be presented each year in May by the SMAST Dean and the awarded student’s advisor. The award will consist of a certificate and $500 scholarship.

This is an UNOFFICIAL website for graduate students and alumni in the School for Marine Science and Technology (SMAST) at the University of Massachusetts - Dartmouth. News, postings, documents, forms, and other information is for our information only. For official information, we urge you to visit the SMAST, IMS, or UMass Dartmouth websites. We hope that you find this information helpful to guide you through your graduate student experience at SMAST. Please contact us with any feedback or questions.

The Unofficial Webpage of the SMAST Graduate Students